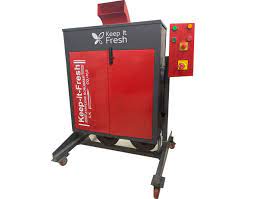 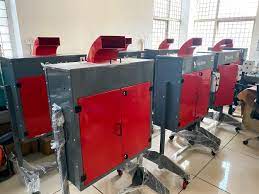 Keep it fresh scrubbers will reduce ethylene levels up to 98.9 percent to reduce shrink and extend shelf life. The unit holds 50 kgs of the Kif power Balls. The media can effectively lower ethylene gas readings in storage areas from 75,000 to 150,000 cubic feet, depending on the commodities being stored. In larger rooms more machines can be used. it can also be proven to kill molds, rots, bacteria and remove odors.

Each unit uses 50 kgs of media to get the proper air speed across the pellets for the reaction time needed to remove the ethylene gas. The media start out a bright purple and turn brown from the outside in. When there is 25% purple and 75% brown it is time to change the Kif power Balls.

You can place the unit most anywhere in the room, as the units are on casters, just make sure you don’t block the air flow. The unit works in conjunction with your cooling system air movement.

After the trial, conducted over a period of 16 days, the total kgs of produce lost in the control replicate was 18.18 kgs, equating to a value of $64.50. In the KIF Turbo treated environment, produce loss was only 6.80kg valued at $24.12

Client has reported that they have certainly been impressed with the results seen from the KIF Turbo unit. There was roughly only half the spoilage from produce treated by the Turbo solution, compared with produce that hadn’t been.

The impact of this saving over the entire season is going to deliver a rapid return on investment for client.